How DID they build the pyramids…? 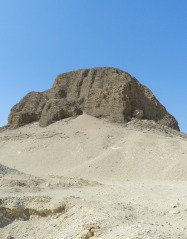 Manchester Museum has a unique collection of objects connected with pyramid building. Many everyday tools have survived from a settlement specially-planned to house workers who built the pyramid of King Senwosret II (c. 1880-1874 BC).

In ancient times the town was called Hetep-Senwosret (‘Senwosret-is-pleased’ or ‘Senwosret-is-satisfied’). Today the town is known as Kahun, the name given to it by the site’s excavator W.M.F. Petrie (1853-1942 AD) after hearing the name from a local man. The whole site, including the king’s pyramid, its associated temples and other tombs, is more commonly called Lahun. It is situated at the eastern edge of the Faiyum region – an area of major building works in the Middle Kingdom (c. 2055-1650 BC).

The pyramid was built upon a natural outcrop of limestone, of over 12 metres in height. An internal framework of limestone walls was built to form a structural skeleton. Measurements for this and other aspects of the building work would have been made using cords and a plumb line (Acc. No. 104). Around the pyramid were also discovered a wooden mallet (Acc. No. 55) and, most interestingly, rollers, also made of wood (Acc. No. 6197). These would have been used to move the heavier stone blocks up the side of the pyramid on a ramp. 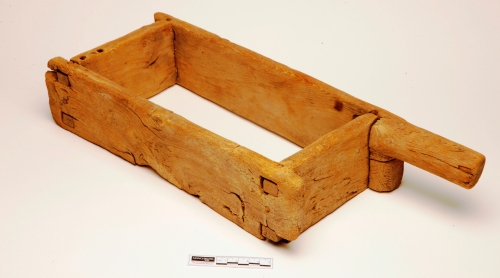 Unlike earlier examples, the core of Senwosret II’s pyramid was constructed largely from sun-dried mud bricks. Brick moulds (Acc. no. 51) would therefore have been in common use by workers. The pyramid was faced with white limestone blocks to give the appearance of a solid stone structure. The lowest course of this casing was set into a rock-cut foundation trench as a precaution against movement of the masonry caused by the settling of the mud bricks. A copper chisel (Acc. no. 204) found at the workers’ village may have been used for dressing stone both at the pyramid and in surrounding buildings. Most of this material was removed by later kings, such as Ramesses II, for use in their own buildings.

Other items in Manchester would have been used in the construction and maintenance of buildings in the pyramid complex. A plasterer’s float (Acc. no. 52), with traces of plaster still adhering to its flat surface, might have been used to lay plaster floors – as found in some of the town’s houses – or to finish the surface of walls. Agricultural implements might also have been used near the pyramid: when finished, it would have been surrounded by rows of trees, indicated by the remains of roots in pits, which would require tending. 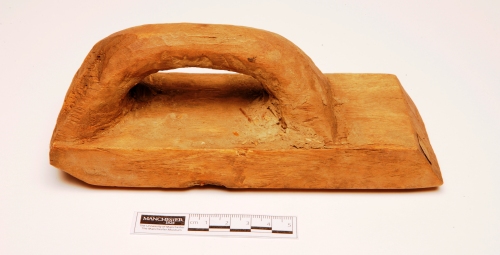 Tagged as how did they build the pyramids, Kahun, Lahun, pyramids, Senwosret II, tools