Beekeeping in ancient Egypt and today 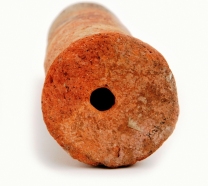 The Manchester Museum contains an intriguing object numbered 296. At 38cm long and 7.8cm in diameter, at first sight it looks like a thin pottery vessel, open at one end and with a small hole at the other. Were it not for the chance discovery of a dead bee inside (and traces of pollen), the function of this object may have gone unrecognised as an ancient Egyptian beehive.

The ancient Egyptians were extremely fond of honey, which they used to sweeten cakes and beer. Beekeeping is most famously depicted in the Theban tomb of Pabasa (TT279), an official during the 26th Dynasty (c. 650 BC). The practice of using large numbers of pottery cylinders of roughly the same design continues today. Acc. no. 296 is a fine example of an object that attests a practice that we know must have taken place, but which is only hinted at in textual sources or fleetingly represented in tomb scenes. Perhaps unsurprisingly, it originates from Petrie’s excavations at the Middle Kingdom town of Kahun, which has furnished us with so much detail about life in ancient Egypt. 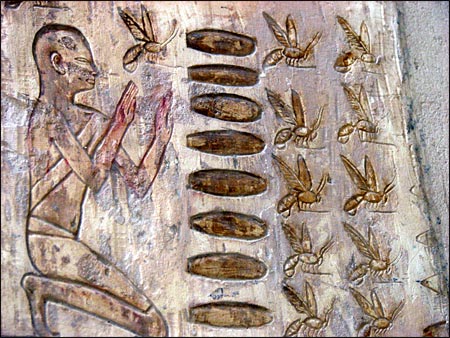 Beekeeping shown in the tomb of Pabasa

Colleagues at the ManchesterMuseum, Whitworth Art Gallery and Manchester Art Gallery have recently participated in a training course to learn the ancient art of beekeeping. A nasty mite called Varroa has wiped out large numbers of bee colonies in the UK, leading to calls for action to ‘save the bees’. Learning beekeeping is one very important contribution to sustain bee populations, which are vital for the pollination of plants – and therefore the production of crops. It is hoped that the Museum will soon have its own beehive, with honey to sell in our shop. Who knows, we may soon also be producing ancient Egyptian sweets!