Texts in translation #9: The inscribed statue of the admiral Hor (Acc. no 3570) 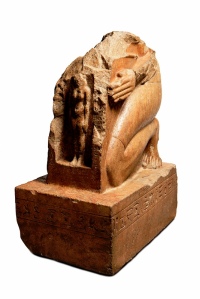 This statue depicts a man named Hor (whose ‘good name’ was Psamtek), who held a pair of unusual titles that equate with a modern rendering of ‘Admiral of the Mediterranean Fleet’. Although damaged, this life-size quartzite statue would have been of very high quality when complete. Hor is shown holding – and therefore eternally protecting – a shrine with an image of the lion-headed form of the goddess Bastet. This iconography supports the statue’s original location at the site where it was found by Flinders Petrie: Leontopolis (‘City of the Lions’) – modern Tell el-Yahudiya. By being shown kneeling in a submissive – but at the same time protective – gesture, it was hoped that the goddess would reciprocate and extend her own protection towards Hor in the form of his statue.

The statue’s texts combine ancient assertions of nobility, and novel titles concerning Egypt’s seafaring activities. A provisional translation, based on Petrie’s reading of the signs, is as follows:

At the front of the shrine is, on one side:

Chief of the royal fighting ships in the Great Green (Sea), Hor, whose good name is Psamtek

… born of the Lady of the House Taanetempawia

At the top of the base is: 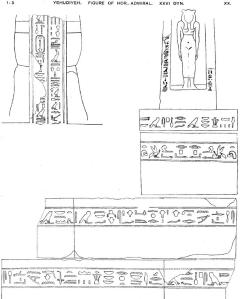 Petrie’s copy of the text

Commander of the Aegean island(er)s, Hor, whose good name is Psamtek

The inscription on the back pillar reads:

… in the heart of the Lord of the Two Lands, the Horus Menkh-ib, sweeter than all upon his throne of sweet wood

… command of the perfect god, Nefer-ib-re (Psamtek II), commander of the lands of the

Around the base, symmetrically arranged, are two lines of inscription:

The nobleman and governor, the royal seal-bearer, the beloved sole companion, satisfying the wishes of the king in the lands of the Greeks; one known to the Lord of the Two Lands because of his effectiveness,  Hor, whose good name is Psamtek.

The nobleman and governor, the royal seal-bearer, the beloved sole companion, exacting in his plans that were entrusted to him, pleasing (lit. widening the heart of) his lord in all his expeditions abroad, Hor.

The 26th Dynasty was a period when a number of ancient traditions were revived, in both visual culture and in texts. This may have had something to do with a resurgence in national feeling after a period of foreign domination, but appears to have begun under these non-native rulers themselves. The fashion for having a ‘good name’ dates back to the Old Kingdom and was reintroduced among the elite during the 26th Dynasty.  Hor’s ‘good’ name’ of Psamtek might refer to the sovereign under whom he served (Psamtek II, 595-589 BC), but more likely commemorates the much more illustrious Psamtek I (664-610 BC), during whose long reign Hor was probably born.

In Hor’s inscription, the ‘Great Green’ must refer to the Mediterranean Sea – though there has been much debate about this identification. During the 26th Dynasty, Egypt developed its own navy and employed Greek and Phoenician mercenaries to form the crew of its galley-type ships. These mercenaries were based in stratopeda (camps), which were described by Classical writers as being situated along the Pelusiac branch of the Nile – downstream of Tell el-Yahudiya, where Hor’s statue was set up. Commercial centres grew out of these military settlements, and Egypt’s population became increasingly cosmopolitan. It was, however, typical that commanding officers of these forces were Egyptian. Hor’s reference to “his (the king’s) expeditions abroad” implies a role in the expansionist foreign policy of the 26th Dynasty kings. Psamtek II, for example, campaigned in both Palestine and Nubia during his short reign.