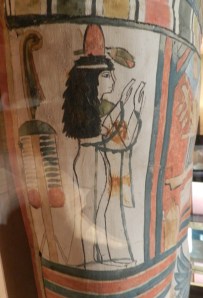 Detail of the figure of Shebmut, from her cartonnage mummy case – a highlight of the Macclesfield collection.

Amidst all the intense preparations for our Ancient Worlds re-display, a highlight of this week was a visit to the West Park Museum in Macclesfield – home to almost 500 ancient Egyptian and Sudanese objects. The collection is largely the result of the collecting activities of Miss Marianne Brocklehurst, a friend of Amelia Edwards (founder of the EES), daughter of Macclesfield’s first MP, and an avid Egyptophile. Marianne and her travelling companion Mary Booth (collectively known as the ‘MB’s in Amelia’s accounts of their travels), had both a keen eye for Egyptian antiquities and the money to afford several fine objects.

The collection is now under the charge of Honorary Curator Alan Hayward. Alan is an extremely knowledgable guide to the objects in Macclesfield, and an authority on the MBs in Egypt. A highlight of the collection is the 22nd Dynasty cartonnage mummy case of a temple singer of Amun named Shebmut. Marianne gives a hair-raising account in her diary of buying the case (with mummy inside) in western Thebes and having to jettison its embalmed occupant for fear that the smell of the mummy would arouse suspition from the crew of the dahabiya upon which the MBs were travelling! 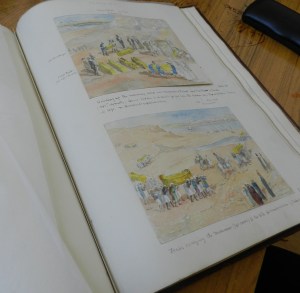 Another highlight of the visit was seeing Marianne’s profusely illustrated diary and watercolour sketches – including the only depiction of the clearance in 1891 of the Deir el-Bahri cache of priestly mummies. It was particularly pleasing to be able to introduce Cynthia Sheikholeslami, a friend and colleague from Cairo who has extensively researched the cache, to Alan – and the original copies of the sketches.

A very useful digital version of both Marianne’s sketches and a catalogue of the objects at Macclesfield is available on CD at the Museum. I hope to present some of the parallels between the Macclesfield collection and material in Manchester sometime in the future.