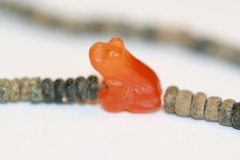 We recently had a visit from Joy Kremler, a Curatorial Assistant at the National Gallery of Victoria, Australia. Joy was visiting Manchester to discuss the process of redisplaying archaeological and Egyptological collections in advance of plans for a refurbishment at her own institution. Joy also has a particular interest in frogs, especially in the early apperance of frogs in Egyptian iconography and their use as amulets. It was a great opportunity, therefore, for Joy to meet my colleague Andrew Gray, our Curator of Herpetology, and see some of the many living frogs we have in our Vivarium at the Museum. 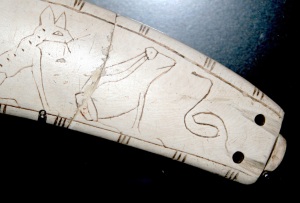 Middle Kingdom ivory wand or birthing tusk from the ‘Ramesseum Tomb’. Acc. no. 1801.

Joy was keen to point out although the frog in ancient Egypt is often associated with the goddess Hekat, the appearance of frogs in iconography is much earlier than the firm association with this deity. In fact, the frog is one of the earliest animals to be attested as amulets in the Predynastic Period. The Egyptians most commonly referred to frogs by the onomatopoeic term ‘kerer‘. Frog spawn had a resonance with Egyptian ideas about regeneration, and the hieroglyph of a tadpole stood for the number 100,000. Images of

frogs appear alongside much more fearsome animals on Middle Kingdom ivory wands or birthing tusks, several examples of which we hold at the Manchester Museum. Frogs also decorate objects as spouts, implying a close connection with the Nile flood and the flowing of water. Frogs continued to feature throughtout Pharaonic iconography and even appears as a symbol of Christian resurrection in the Coptic period, when terracotta lamps often bear its image.

Joy’s visit was an excellent chance to view items in the collection which have often been overlooked, and to discuss frogs and their associations in ancient Egypt in comparison with modern knowledge of their behaviour.

You can find out more about frogs at the Manchester Museum here, on Andrew Gray’s popular Frog Blog.