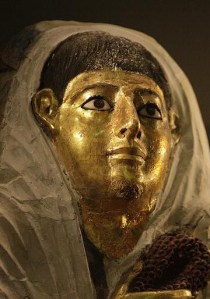 The next Manchester Ancient Egypt Society lecture will be given by Dr. Ryan Metcalfe

Despite being a source of fascination and scientific investigation for well over a century, the methods used by the ancient Egyptians to mummify their dead are still not fully understood. The effects of the process on chemical analysis are also rather obscure, but the range of materials used in mummification may have a significant impact. A large number of experimental models have been produced over the years. Although these have tended to look at the overall success of the methods under investigation, the last few years have seen a small number of studies focussing on the chemical and biochemical effects of Egyptian mummification. This talk will present the most recent experiments undertaken at Manchester.

Ryan Metcalfe spent over 12 years in the KNH Centre for Biomedical Egyptology, working up from MSc student to Lecturer. Coming from a background in the sciences rather than Egyptology, his research has concentrated on the use of chemical and biological analysis and in particular how mummification affects our ability to work with ancient human remains.

In ancient Egypt and Sudan groups of objects were buried at specific points, such as the corners of buildings, during foundation rituals to mark the construction of temples and tombs – rather like symbolic ground-breaking ceremonies at the beginning of the construction of modern buildings. These ‘foundation deposits’ were deliberately chosen to symbolically ensure the effectiveness and longevity of the building, and included faience plaques in the form of sacrificed animals, model tools, pottery and basketry.

Foundation deposits take the form of different sized pits, which were often lined with mudbrick. During his excavation of the 12th Dynasty pyramid temple of Senwosret II at Kahun, W. M. F. Petrie found a foundation deposit and stated:

In the middle of the temple area a hole 31 inches square was excavated in the rock about four feet deep, to contain the foundation deposits. Into this the four sets of objects [model tools] were thrown, without any arrangement or order.

Although foundation deposits became gradually more common during the Old and Middle Kingdoms, they reached the height of their popularity during the New Kingdom (c. 1550-1070 BC). Manchester Museum’s collection includes a range of deposits from different sites and periods, including over 100 faience plaques symbolising offerings in the form of parts of oxen, ducks, flowers and fruit, like these plaques of sacrificed headless oxen [Acc. No. 1560, left]. We chose to display most of these – many for the first time – in the new Egyptian Worlds gallery, to emphasise their quantity. 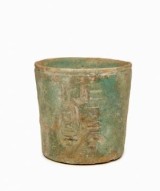 Foundation deposits have also been found beneath royal pyramids in Sudan, including these beautiful faience cups preserving the names of the Kushite kings Aspelta [Acc. No. 8581] and Anlamani [Acc. No. 8579], both excavated by the Harvard-Boston expedition from the royal pyramids at the site of Nuri in Sudan.

Anna Garnett is Trainee Curator in Egypt & Sudan at the British Museum and Manchester Museum. Follow her blog here.