One of the main tasks I’m working on as part of my traineeship here at Manchester Museum is the reorganisation of the Egyptian pottery store. The many boxes of pottery sherds (fragments) in particular continue to yield surprising finds: this week I came across two beautifully decorated sherds which immediately caught my eye.

During the New Kingdom, in particular the late 18th Dynasty, certain pottery forms including storage jars and bowls became highly decorative and featured moulded and painted motifs. Blue pigment, derived from cobalt, was also used to decorate pottery during this time and is distinctive to the New Kingdom and to particular sites including Amarna, Gurob and Malqata (Thebes).

Painted and moulded floral designs such as lotuses, cornflowers and poppies were used to decorate the vessels as well as animals including ducks, gazelles and ibexes. Hathor, goddess of fertility and beauty, was often shown with a human face and cow’s ears on blue-painted storage jars like these examples in the Metropolitan Museum of Art, New York. 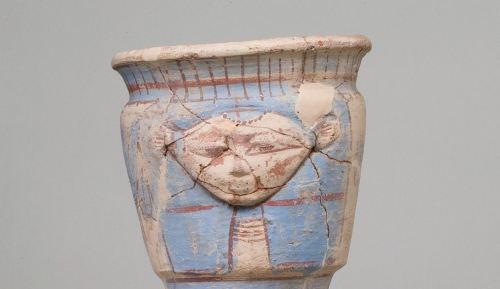 Blue painted pottery was an item of high status since the cobalt, obtained from the Western Desert, was so difficult to procure and the level of craftsmanship involved in their creation made these objects particularly desirable during the New Kingdom. Blue-painted sherds with Hathoric motifs are still being found in Egypt today, such as this beautiful example found recently at the site of the palace of Amenhotep III at Malqata.

Hathor’s face was also moulded onto the surface of two sherds at Manchester Museum: a rim from a large polychrome carinated (angled) bowl (Acc. No. 6204) and another painted blue, red, white and black, which may originally have been part of a decorative handle (Acc. No. 10984). Unfortunately the provenance of these objects has since been lost but the decorative style and form of [6204] suggests that it dates to either the late 18th Dynasty or, perhaps more likely, the Ramesside Period.

The presence of blue pigment on [10984] suggests that it dates to the late 18th Dynasty and is likely originally from Amarna, Gurob or Malqata (Thebes). We can confidently compare this object with an example from Amarna from the Fitzwilliam Museum, Cambridge (E.GA.4569.1943) which is also blue-painted and of a similar form, which may suggest that our example is also originally from Amarna.