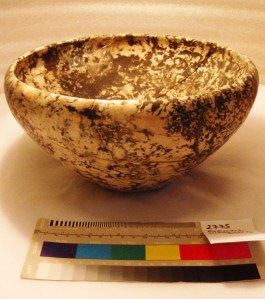 Syenite vessel from the site of Hierakonpolis (Acc. no. 2755)

The next Manchester Ancient Egypt Society Bob Partridge Memorial Lecture will be given by Dr. Renée Friedman (British Museum)

Everything in its Place: New Views of the Elite Predynastic cemetery at Hierakonpolis.

Hierakonpolis is famous as the home of the Palette of King Narmer, but on-going work at the site is revealing the tombs of kings some 500 years earlier, who expressed their power not only in the size and wealth of their graves set with above-ground architectural compounds, but also with the people and intriguing array of wild and domestic animals they took with them to the afterlife. This unique collection of animals gives insight into the physical reality behind early symbols of power, while the architectural settings in which the burials are arranged is revealing how the early Egyptians understood and ordered their world. This lecture will present our current thoughts on this remarkable cemetery modified as required by the new discoveries to be made in the January-March 2014 season of excavation at the site.

Dr. Renée Friedman is a graduate of the University of California, Berkeley in Egyptian Archaeology and has worked at many sites throughout Egypt since 1980.With special interest in the Predynastic, Egypt’s formative period, in 1983 she joined the team working at Hierakonpolis, and went on to become the director of the Hierakonpolis Expedition in 1996, a title she still holds. Currently the Heagy Research Curator of Early Egypt at the British Museum, she is the author of many scholarly and popular articles about all aspects of the fascinating site of Hierakonpolis.