To commemorate the WW1 Centenary, researchers from Cardiff University will hold a ‘roadshow’ at the Museum on Saturday 11th and Sunday 12th June exploring local links between Manchester regiments serving in Egypt and the Middle East and collecting memories. Items from the Manchester Museum archive relating to the Great War will be on display, with short tours by the Curator of Egyptology. A special presentation will take place at 11am on Saturday 11th June.

The team hope that visitors will bring photographs, postcards, stereoviews, lantern-slides, or any other items relating to wartime spent in Egypt and Palestine along to find out more about how they fit into a wider picture. Once loaded to the website copies of images will be available for all to see and so give a more comprehensive view of the First World War in Egypt than is presently available.

Please bring along any photographs etc. for the team to re-photograph or scan for uploading to the website – they are not looking to keep any original material, everything will be rendered virtually. 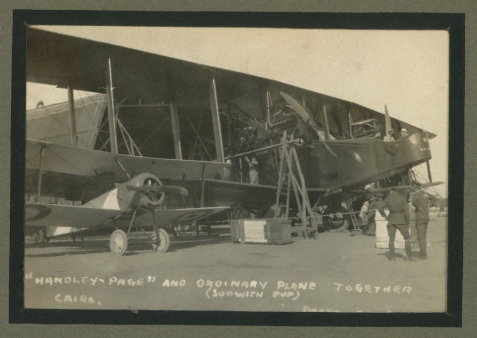 Much of the commemoration of the First World War has focussed on the Western Front and so gives the impression that the war was entirely one of mud and trenches with very little movement. However, the war in Egypt and Palestine was much more mobile and often fast moving. It is a surprise to many that a great number of personnel served in Egypt and Palestine at some point during the war with units regularly being withdrawn from the Western Front to serve in the area before returning to Europe.  A new project offers a different perspective on the First World War using images taken in Egypt and Palestine during the period of the conflict.

Leading the project from Cardiff University are Dr Steve Mills and Professor Paul Nicholson of the School of History, Archaeology and Religion supported by project officer Hilary Rees.  The project, supported by the Heritage Lottery Fund, focusses on collecting and making accessible images of Egypt and Palestine as they would have been seen by people during the First World War.  To this end we are collecting not only military images but also those of the ancient monuments of Egypt and Palestine which have much to tell us about the presentation of archaeological sites at that time.

The aim is to collect photographs taken by service personnel, postcards, lantern slides and stereo-views. The project does not collect the actual views but rather scans of them which will be uploaded to a dedicated interactive website where anyone interested in seeing what their ancestors saw or who is interested in how the ancient monuments, cities, towns and villages looked during the First World War can get that information.

The website at http://sites.cardiff.ac.uk/ww1imagesegypt/ will be a perpetual online learning resource and archive offering new views of archaeological sites, military installations and cities as they appeared during the war.

The participation of members of the public at all stages of the project is very welcome. It is hoped that they will contribute by uploading relevant images and information to the site and in identifying images.  The project team can be contacted directly at ww1imagesegypt@cardiff.ac.uk

Filed under Egypt events at the Manchester Museum, Uncategorized