A guest post by Dr. Nicky Nielsen, Lecturer in Egyptology at the University of Manchester, on a Late Period piece now published in the Journal of Egyptian Archaeology. 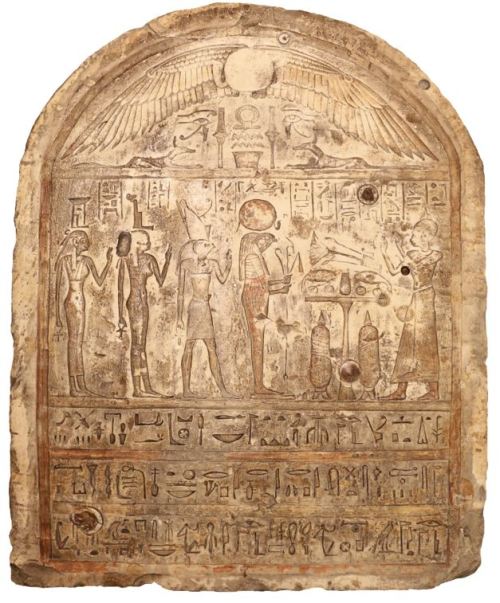 The stela is divided into three fields: at the top is a lunette with a winged sun-disk, two Wadjet-eyes and two jackals. The second field contains five figures: at the far right is the stela’s owner, Horenpe and standing before him are four deities identified as Re-Horakhty, Hersiese, Isis and Nephthys. Some traces of red paint are preserved on the body of Re-Horakhty, on Nephthys and on Horenpe himself.

The text is divided into two sections. The first comprise a brief prayer and a series of labels above the various figures: Words spoken by Ra-Horakhty, Great God, Lord of Heaven in order that he may give a good burial in the Necropolis! Horus Son of Isis, Divine Isis, Nephthys Mistress of Heaven. [The Osiris], the God’s Father Horenpe, the Justified before the Great God.

The main text is in the third register under the figures and starts with a standard Offering Formula: An offering which the King gives to Osiris, Foremost of the Westerners, Great God, Lord of Abydos so that he may give a voice offering of bread, beer, oxen and fowl, incense upon the fire, wine, milk, vegetables(?) and everything good, pure, sweet and pleasant for the ka [of] the Osiris, the God’s Father Horenpe, son of the similarly titled Osirimose, born of the Mistress of the House Mutenpermeset. 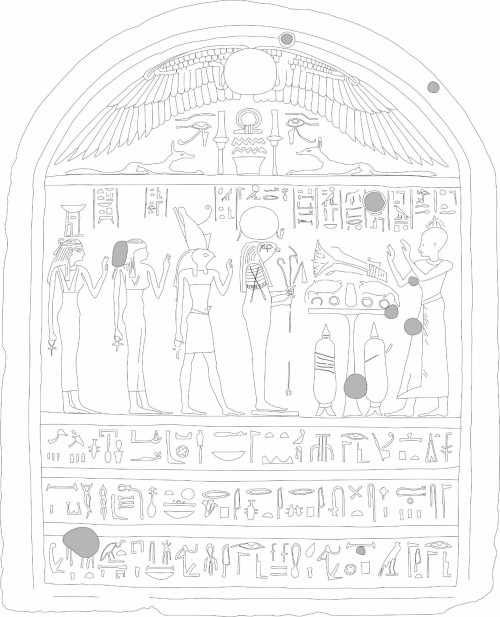 The stela’s origins are unclear, but based on style it seems likely that it dates to the 26th Dynasty and may have originated from a workshop at the Middle Egyptian site of Abydos. A very similar stela also belonging to an individual by the name of Horenpe was found at this site in 1906 by the British archaeologist John Garstang and is now in the Garstang Museum of Archaeology at the University of Liverpool.