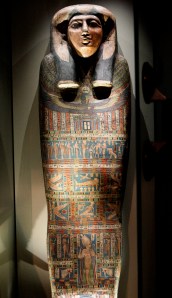 The mummy and coffins of Asru, an elite lady from 25th-26th Dynasty (c. 750-525 BC) Thebes, were among the earliest additions to what was to become the Manchester Museum collection when they were donated to the Manchester Natural History Society by William and Robert Garnett in 1825. She has already been unwrapped, probably at one of the fashionable ‘mummy unrollings’ of the period. In modern times, Asru proved to be the perfect patient when she was investigated by the Manchester Egyptian Mummy Project in the 1970s, because she had suffered from so many ailments – including arthritis, and parasitic infestations such as Strongyloides and Schistosomiasis (Bilharzia).

In 2012, in preparation for the re-opening of our Ancient Worlds galleries, all of the Museum’s 20 complete human mummies – including Asru – were scanned using the most up-to-date technology at the nearby Manchester Children’s hospital. The scans, conducted in collaboration with Professor of Radiology Judith Adams, featured on a number of TV reports but much of the new information derived did not become apparent until the scans had been properly and carefully analysed, sometimes taking months after the scanning session. PhD researcher Robert Loynes was instrumental, bringing his knowledge as a medical practitioner to the study of mummified remains. 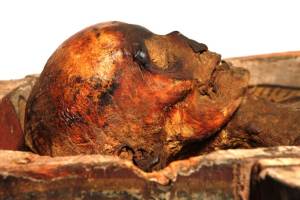 The latest CT-scans confirmed Asru to have been an elderly woman for ancient Egypt, between 50 and 60 years of age at death. Interestingly, there was new evidence of arthritis in her neck, consistent with bearing a heavy weight over a prolonged period. Greater Manchester Police had established in the 1970s that, on the basis of her fingerprints, Asru’s hands and feet showed that she had lived a life of comparative ease. Perhaps what she carried on her head had a ritual rather than practical function?

Most interesting of all was the new information revealed about Asru’s mummification technique. CT-scans confirmed that, like many Egyptian mummies, Asru’s brain had been removed from the skull. Yet, rather than evidencing the standard method of extracting the brain through the nose, Asru’s ethmoid bone was found to be intact. Instead, transorbital excerebration had been performed: the removal of brain matter through the eye sockets. This is known in other cases but appears to have been extremely unusual.

Recently an opportunity also arose to examine Asru’s two coffins more closely, and to read the extensive inscriptions on them. These texts are mainly formulaic prayers for offerings and provide very little in the way of personal information. This is contrast to ideas held when mummies and coffins, like those of Asru, were arriving in the West; collectors believed that the texts were largely biographical and gave detailed accounts of the life of the coffins’ occupant. Such ‘biographies’ that were supplied in displays were often completely fictional, in an attempt to add interest and a humanising gloss to a curiosity. Thus, when Asru (read as ‘Asroni’) was first exhibited she was referred to as a ‘maid of honour in the court of the 20th(!) pharaoh’ – perhaps just because of the prestigious ‘look’ of her mummy and coffins. 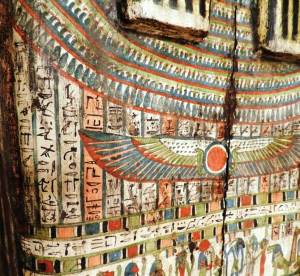 Asru’s own name means “Her arm against them”, probably a reference to the protective power of the goddess Mut, consort of the Theban god Amun. This apotropaic formulation is especially typical for non-royal names during the Late Period (c. 750-30 BC). Asru holds no titles and is in fact only ever designated ‘Lady of the House’ (= ‘married woman’) on her coffins. The title ‘temple singer’ may come from confusion with other female mummies in the collection or developed out of her false identity as a ‘handmaiden.’

Most excitingly of all, it has been possible to read the names of her parents. Asru’s mother is identified as the ‘Lady of the House’ Ta-di-amun (‘She whom Amun has given’) and her father was called Pa-kush (‘The Kushite’), a ‘document scribe of the southern region’.

Given that, based on the style of her coffins, Asru is likely to have lived and died at Thebes in the 25-26th Dynasty, this is of potentially great interest. Egypt was ruled by Kushite kings during the 25th Dynasty, who had a stronghold at Thebes. Might Asru’s father have been a part of their administration? If so, she may have been very important indeed. Such findings prove the value of reassessing evidence which may already seem well-known.

Over the past few weeks we have been filming short clips to appear in the new Ancient Worlds galleries, and in digital content to connect with them. This week we filmed Dr. Roberta Mazza of the University of Manchester talking about Egypt in Late Antiquity, in the beautiful surroundings of the John Rylands library. I am conscious, though, that I promised a follow-up post to news of another filming session, CT-scanning the mummies.

As part of a larger project, led by Profs Rosalie David and Judith Adams, to CT-scan all our mummies with the latest technology at the Manchester Children’s Hospital, one day last month we took one of the museum’s best loved mummies for a state-of-the-art examination.

Asru, already unwrapped, and her two finely decorated coffins were the first significant additions to the Manchester Egyptology collection. They were donated in 1825 by E. and W. Garrett to what was then the Manchester Natural History Society collection. Mentions of the Theban god ‘Amun’ make it probable that her burial was originally located on Luxor’s west bank. Stylistically, her coffins date to the 25th Dynasty (c. 750-664 BC) 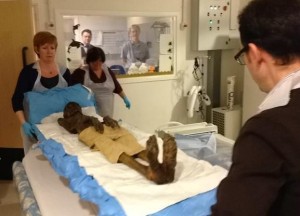 Preparing Asru to be scanned

Asru has enjoyed a surprising afterlife. She was an early subject of the Manchester Mummy Project, and proved a perfect patient. Using a pioneering range of non-destructive scientific techniques, the Project showed that in life Asru had suffered from a number of diseases. Among her complaints would have been anaemia, coughing, stomach ache and diarrhoea, caused by a parasitic bladder infection – called schistosomiasisis (or bilharzia) and other worm infestations, probably Strongyloides. Despite these ailments – and, judging from her fine coffins and mummification techniques, because of her wealth – she had lived to be around 50 at death – elderly for an ancient Egyptian! When the Greater Manchester Police took Asru’s finger- and toeprints (another first, for a 2700 year old body), they showed none of the wear and tear that most ordinary Egyptians would have expected.  Her duties as a chantress cannot have been arduous. 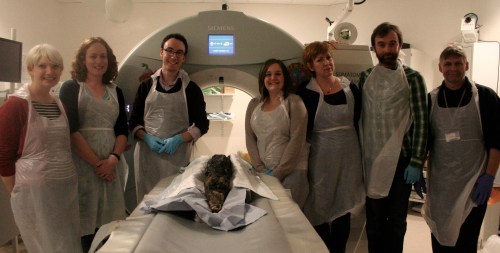 By conducting CT-scans using the latest technology, we hope to find out even more about Asru – things which, in the 1970s and 80s when she was first examined, were not possible to establish. 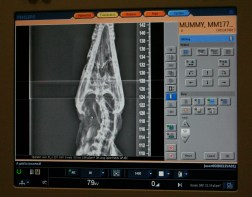 X-ray of the crocodile’s head

While scanning Asru, we also took the opportunity to subject one of our crocodile mummies to further examination. Lidija McKnight and Stephanie Atherton, colleagues from Manchester’s KNH Centre for Biomedical Egyptology, were interested to know more about what appeared to be a (fatal?) blow to the head. Results of the CT scans have not yet become available, but promise to give us much more information on the lives of people – and animals – in ancient Egypt. Results will be featured in digital content in the new Ancient Worlds gallery, and further collaborative research is expected to take place soon. 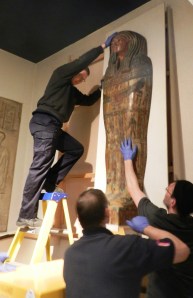 Coffin lid of Khary (Acc. no. 9354b) being removed from the old Afterlife gallery

Yesterday saw the latest phase of clearing – or ‘decanting’ – the Egyptian afterlife gallery in preparation for building work to begin on the new Ancient Worlds Galleries. This was the first time some of the mummies have been moved in over 30 years. A skilled team of movers and conservators ensured that each was carefully transferred to a temporary storage space to await conservation.

Among the travellers was Khary, a priest at the temple of Karnak during the Late Period (c. 750-330 BC), and his brightly painted coffin (Acc. no. 9354a-b). Both were purchased in Egypt in the late 19th Century, and arrived in Manchester via the Ship Canal in 1893. They were donated to the museum in 1935. Moving Khary afforded an opportunity to examine at close quarters his carefully wrapped body and brightly painted coffin. Although most of the mummies will not be put on display in the new galleries, improved storage will make access to them easier for researchers – who previously could only peer into a dimly-lit display case or had to rely on archive photographs. Because they do not add significantly to our understanding of funerary beliefs, the skeletal remains of the Two Brothers will also be moved into storage, where their condition can be more closely monitored while being accessible to researchers. 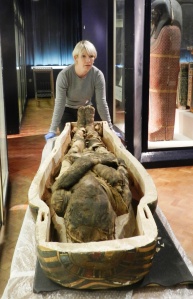 Two Graeco-Roman mummies (Acc. no.s 1767 and 1768) – still wrapped, with their portrait panels in place – will be displayed together with our superb collection of ‘Faiyum portraits’ in a dedicated space, where Asru is located now. This will be particularly exciting, because for the first time in many years visitors will be able to see the finely-painted faces of these men, which previously were difficult to view because of the arrangement of the old gallery.

Part of the new displays will also highlight the role women played in Egyptian religious practice, focusing on the life of Asru, a temple singer in the 25th-26th Dynasty (c. 750-525 BC) and a firm favourite in the museum. Her well-preserved body is an excellent example of mummification. This process – along with how modern techniques help us understand ancient disease – will be explained in both printed and digital media beside her mummy and coffins. 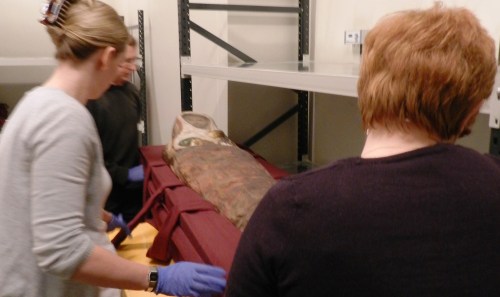 Graeco-Roman mummy of a man (Acc. no. 1767) is placed into temporary storage to await conservation before redisplay