Animal Mummies #5: Seeing inside the wrappings 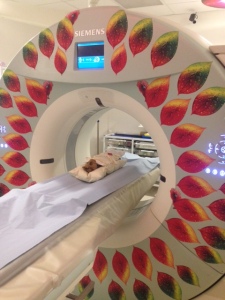 A Liverpool kitty in the CT-scanner

X-rays have been used as a method by which to see inside bodies since they were discovered by Wilhelm Rontgen in 1895. Some of the first ‘patients’ to be studied in this way were Egyptian animal mummies which were not able to be damaged by the somewhat unknown effects of radiation. Since this time, radiography has become increasingly invaluable in clinical practice on living humans and animals, but it has become one of the primary research techniques to investigate the contents of wrapped mummy bundles, preventing the need to unwrap, and ultimately destroy them.

Radiography has been widely used at the University of Manchester since the 1970s to study the mummy collections. From these early stages when plain film X-rays were the main method, the technology involved in radiography has developed quickly and we are now able to use much more advanced technologies to gain a better understanding of mummies and how they were made. Although CT scans have been around since 1979, their routine use on mummies has really occurred since 2000. Advances made since 2005 with the introduction of fully digitised methods have reduced the complexity of the X-ray and CT process and have made it much easier to share results with fellow researchers around the world.

Inside a kestrel mummy

As part of the Ancient Egyptian Bio Bank project, over 300 animal mummies have been studied through a collaborative partnership with the Central Manchester NHS Trust. The Trust have allowed access to radiography facilities and experienced staff outside of clinic hours to enable this work to take place. In fact, the mummies always attract a lot of attention when they go to the hospital with patients and staff alike taking a keen interest in the rather unusual patients! We tend to study mummies in groups of around 20 mummies at a time, simply because it is logistically difficult to deal with more than this in one session. We always have experienced conservators and curators on hand to ensure that the mummies are kept safe during the process. Most mummies do not need to be handled at the hospital at all as they can be scanned in their protective boxes which minimises the dangers of handling and keeps movement to a minimum. 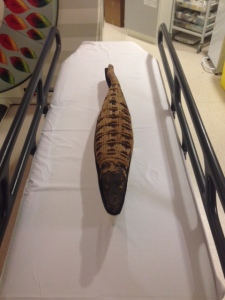 During their visit to the hospital, all mummies are given a full investigation using X-rays and they also receive a full body CT scan. X-rays are taken in two opposing angles to ensure that we obtain the maximum amount of information about each specimen. In some cases, the contents are lying at an unusual angle within the bundle which means that further images are required taken at oblique angles to capture any missing information. X-rays have the advantage of giving excellent spatial resolution of the contents, but they do suffer from magnification and superimposition of structures which can make interpretation difficult. The advantage of a CT scan is that images are obtained from multiple directions which eliminates these issues and allows for direct measurement of bones and increases our chances of identifying anomalies. The data obtained through the CT process to 3D print anomalies from inside mummies, giving the ability to handle them directly and compare them to skeletal collections. CT has proved successful in identifying non-skeletal material within mummy bundles such as egg-shell, feather and reeds which often don’t show well on X-ray.

Clinical radiography is limited by the radiation doses allowed by the equipment. For mummies which reveal interesting anomalies, it is sometimes possible to use industrial CT (micro-CT) where higher radiation is used to obtain better resolution. Some mummies which have appeared ‘empty’ when scanned at the hospital, have revealed skeletal contents when scanned using this technique. This battery of radiographic techniques provides the best available method to see inside mummies non-invasively.

Find out more in the exhibition (including an interactive micro-CT scanner!), Gifts for the Gods: Animal Mummies Revealed, at Manchester Museum from 8th October 2015..

On Thursday the 31st of January, a team from the Museum returned to the Manchester Children’s Hospital to CT-scan two more of our 24 human mummies. This time we were accompanied by a BBC film crew, who recorded proceedings for a segment on The One Show.

The mummy of Demetria had been chosen – shamelessly, I admit – as she was the most outwardly attractive for a TV audience. She had been X-Rayed by the Manchester Museum Mummy Project, led by Rosalie David, in the 1970s but there was lots more information that could come from a modern CT-scanner.

Some of the team (Sam, Ray, and John) lift Demetria onto the scanner. With all the resin and gilding, she’s very heavy.

We know the name of Demetria because it appears – in Greek, along with the name of her husband Icaous – on the headband of her elaborate gilded covering. Demetria’s mummy (Acc. no. 11630) was discovered in 1910 during excavations by the British School of Archaeology in Egypt at the site of Hawara. Like many other mummies for the

site, Demetria died under Roman rule – in the First Century AD. Her burial arrangements are a typical fusion of Graeco-Roman styles – in her hair, jewellery and attire – and traditional Egyptian imagery. This expresses a mixed expectation for the afterlife: as a fashionable, contemporary woman, but also someone who depends on Egyptian ideas about resurrection and eternity. The outer surface of Demetria’s wrappings is still brightly painted with scenes of mummification and the protective Egyptian deities. She stands on her bound enemies, depicted in paint on her cartonnage footcase. Such an approach utilised as many motifs for survival after death as possible.

Initial results of the CT-scan revealed a fairly well-preserved body, with a distorted spine and crushed rib-cage that imply post-mortem injuries. Gilded studs appear in the wrappings, but there was no sign of other jewellery – though at this period little would be expected. The results – 10s of 1000s of individual images – will need considerable study to disclose further information.

The distinct glow of gold. Not posed at all.

Having the BBC film the procedure revealed much more about modern expectations of ancient Egypt than it did about Demetria. The opportunity to showcase the reinvestigation of the mummies – which is fairly standard, and has been practiced around the world for more than a decade – was a superb one. If nothing else, up to five million people now know about the superb Egyptian holdings, and a little of the history, of the Manchester Museum. Yet, despite the polish of the short film and the intelligence, professionalism and obviously deep understanding of John Sergeant, the framing of our 5 minutes of fame re-enforced most of the old tropes about Ancient Egypt: an exotic, potentially scary place, morbidly obsessed with mummies, material value, magic, the weird – a side-show. The attention span of the average viewer of such primetime, magazine-style coverage is not long – nor should it be expected to be. Hopefully those interested by this glitzy snapshot will visit the Museum and learn something more of Ancient Worlds than just mummies and bling.

Mummy 1767 is prepared for CT-scanning

Last week I followed in a proud Manchester Museum tradition when I accompanied four of our mummies to the Manchester University Children’s Hospital to be CT-scanned. The use of Computed Tomography (CT) has become an established method of non-invasive investigation of Egyptian human remains. The current work is part of a wider programme of investigation, using state-of-the-art methods, undertaken on the Museum’s Egyptian mummies by Prof. Rosalie David, former Egyptology curator at the Museum and authority on mummy studies, and Prof. Judith Adams, Professor of Diagnostic Radiology at the University of Manchester’s School of Medicine. It was thanks to Judith’s previous work with Rosalie – and continuing interest in mummies – that we were able to book our ‘patients’ in when the scanner was not otherwise in use.

Beneath the bandages: our first glimpse inside 1767

On Wednesday evening we took the first two subjects in the study on the short journey from the Museum over to the hospital. These were the mummies of two Graeco-Roman gentlemen (Acc. nos. 1767 and 1768) which, because of their elaborate wrapping and in-situ portraits, made are ideal candidates for the procedure. Both mummies will feature in the new Ancient Worlds galleries and we were keen to discover something more about these unnamed men – their conditions in life and age at death. It is planned that the CT data will be given to a facial reconstruction specialist – another Manchester-pioneered technique – to compare the faces of the two men with their handsome (and idealised?) painted portraits. 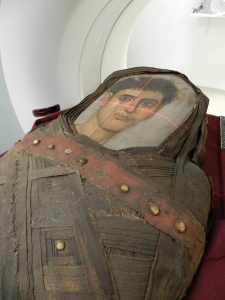 Will the face behind the portrait mask of 1768 match its youthful good looks?

The process of scanning the mummies, and the subsequent generation of a detailed cross-section image of them, was remarkably quick. A group of conservators and technicians from the Museum stood alongside nursing staff in absolute silence as the mummies’ bandages were digitally peeled away. The first mummy (1767) didn’t reveal any immediate surprises, though the scan of the second (1768) showed clearly that the body had been wrapped together with a wooden plank, or mummy board. Graeco-Roman mummy boards are often inscribed with religious texts naming the deceased. If the board is indeed inscribed, then the fine detail of the scan – around 0.6 of a millimetre – ought to make it possible to read the texts on it. This would enable the name to be restored to this otherwise anonymous individual, without the removal of a single bandage. Another interesting observation made at this initial stage was that the brains of both men do not appear to have been removed during mummification. This is characteristic of a focus on the outside appearance of the mummy in the Graeco-Roman period, rather than on internal preservation.

Further analysis will reveal more about the men and their mummification techniques, details of which I will post when they become available. The story of the investigation will feature in the Ancient Worlds galleries and on-line.

Next time: CT-scanning the mummy of Asru and a mummified crocodile – Stay tuned!