Yesterday several curators from Manchester Museum had the pleasure of visiting  Biddulph Grange, a National Trust property in north Staffordshire. We are particularly interested in exploring the theme of migration – of people, objects and ideas – and in ways of capturing the connections. Biddulph Grange represents a wonderful example of multi-cultural influences in the later Nineteenth Century that stretches across traditionally separate areas of Botany, Geology and Egyptology.

In 1840, the horticulturist James Bateman (1811–1897) moved to the 15 acre estate and with help of friend Edward Cooke, developed splendid gardens. Edward Cooke is known to have visited Egypt himself and to have been acquainted with the famous Scottish painter David Roberts, whose many drawings and watercolour sketches made while he was in Egypt heavily influenced British ideas about the country. Together Bateman and Cooke created several discrete areas in the Biddulph gardens: China, the Himalayas, Egypt and a didactic geology gallery.

Biddulph’s Egyptian court was created between 1859 and 1862. It combines topiary in the form of a pyramid and two squat obelisks with stone features: two pairs of sphinxes, a cavetto corniced doorway leading to a passageway ending in a dimly-lit chamber with (rather creepy) baboon statue. The statuary is the work of sculptor Benjamin Waterhouse Hawkins (1807-1894). Hawkins created sculptures of dinosaurs in concrete for the 1851 Great Exhibition at Crystal Palace and was likely to have been inspired by the impressive Egyptian court designed by Owen Jones there. Jones’ designs are, however, more faithful to the ancient originals.

At Biddulph, cultures have been mixed in an eclectic, Orientalising soup – a great example of the migration – and melding – of ideas. Part of the Chinese garden has a gilded bovine statue, provided with a sun disk between its horns – making it resemble the sacred Apis Bull of Egypt rather than a decorative feature found in the Far East. 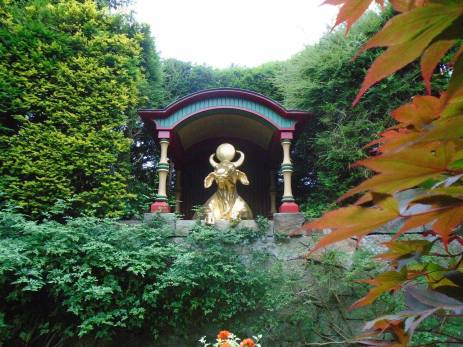 The Pharaonic gateway has the a winged sundisk – however the usual rearing cobras (uraei) either side of the disk have been re(mis?)interpreted as the heads of birds. Combined with the feathered wings and disk, these seem intended to represent peacocks!

Within, sits a statue of a baboon or ‘Ape of Thoth’ – a type of statue we have in the collection. Like our example, the baboon sits with hands on knees; the Biddulph example has stylised fur and pectoral ornament handing from its neck. The face, however, is much more intentionally grotesque than a Pharaonic example and may be the result from borrowing from a Chinese dragon. The overall effect – with red-tinted sky-light above – is reminiscent of the focal point of an animal mummy catacomb. It is intriguing to imagine that a tourist visit to such a catacomb (which were common in the 19th Century)  may have inspired this spooky space. 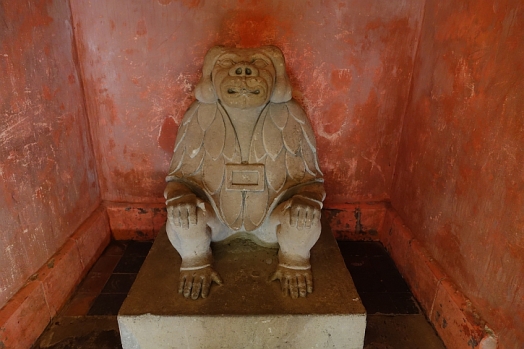 To anyone familiar with ancient Egyptian art, the two pairs of sphinxes look rather severe – but they carry all the essential elements: the striped ‘nemes’-headcloth worn by the Pharaoh, a beard attached to the chin by a strap, an unidentified object in place of the expected rearing cobra (uraeus) on the brow, and even an identifiable inscription. Although somewhat weathered, this was clearly an attempt to represent the two main names of the Pharaoh in oval-shaped cartouches: one, the ‘Son of Ra’ name and the ‘King of Upper and Lower Egypt’ name. Perhaps the name of Ramesses III was the model. 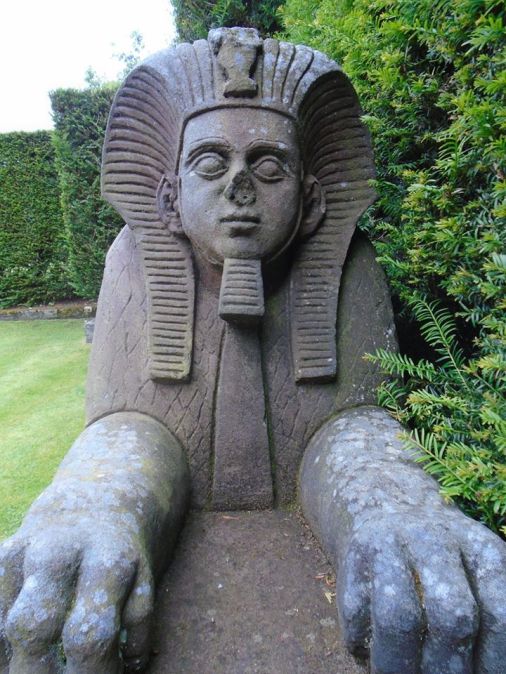 Although Egyptianising (and genuinely ancient) pieces are not uncommon in stately homes of the Nineteenth Century, what is usual at Biddulph is that the use of Egyptian imagery is so consistent and self-contained in one area of the estate. Set amongst other elements, the ‘Egyptomania’ of the Egyptian court is a fine illustration of how exotic ideas and motifs moved and morphed over time and space.