Column, with decoration of Ramesses II and Merenptah (Acc. no. 1780)

Manchester’s imposing (3.8m tall) red granite column (Acc. no. 1780) is one of eight which once fronted the pronaos of a temple dedicated to the ram-headed god Herishef at Herakleopolis Magna (modern Ihnasya el-Medina), 15 miles west of Beni Suef in Middle Egypt. The temple was excavated by Swiss Egyptologist Edouard Naville in 1891, and the columns were distributed to museums around the world shortly thereafter. Other columns from the temple are in the British Museum; Bolton Museum and Art Gallery; South Australian Museum, Adelaide; Museum of Fine Arts, Boston, and University Museum, University of Pennsylvania. English archaeologist W. M. Flinders Petrie re-excavated and planned the site in 1904. The columns were recently studied by Japanese Egyptologist Yoshifumi Yasuoka, who identified traces of the original panels of decoration on them and re-examined their architectural arrangement.

The temple of Herishef was expanded during the reign of Ramesses II (1279-1213 BC), at which time the eight palm-form granite columns were brought to the site from elsewhere. The columns were in fact already ancient when Ramesses reused them. Their proportions and form of their palm-capitals are typical of the Old Kingdom, and it is likely that they originally derived from an Old Kingdom pyramid complex of the Fifth Dynasty (c. 2494-2345 BC). Such recycling of older building material is characteristic of Ramesses II, and of Pharaonic Egyptian architecture in general.

Ruined columns at Herakleopolis Magna, as excavated by Edouard Naville. 1891.

The most likely candidate for the new construction work at Herakleopolis Magna is Ramesses’ fourth son, Khaemwaset, High Priest of Memphis. Prince Khaemwaset is well-known to have taken a particular interest in Egypt’s past, leading to his designation as the “first Egyptologist.” Khaemwaset was particularly active in the Memphite necropolis, where he was responsible for ‘labelling’ the monuments of ancient kings. In the course of such ‘survey’ Khaemwaset would have become aware of sites too ruined to save – but whose elements might be re-purposed for his father’s ambitious building programme elsewhere. In honour of Ramesses II new decoration was added, showing the king worshipping the ram-headed Herishef. The long-lived Ramesses was eventually succeeded by the thirteenth son, Merenptah, who added further columns of hieroglyphs with his own names in poorer quality inscriptions. Given Merenptah’s advanced age at his accession, he would have been keen to make his monumental mark as quickly as possible. By adding texts to standing monuments, his artisans were able to assert his presence and associate the elderly king with his famous father.

Petrie’s reconstruction of the original appearance of the Ramesside pronaos

The Manchester column was originally set up in the University’s Whitworth Hall in the late Nineteenth Century but was moved to the entrance hall of the Museum between 30th November and 2nd December 1979. 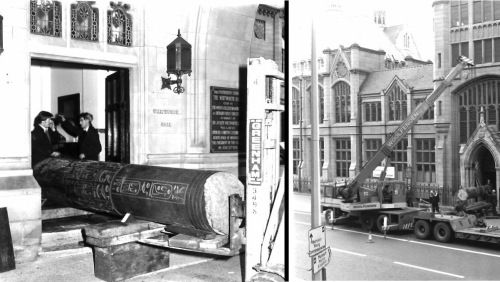 The column leaving Whitworth Hall… and arriving at the Museum. 1979.

It is perhaps appropriate that a monument ‘salvaged’ by History’s first Egyptologist is the first object to greet visitors when they arrive at our Museum (and when they exit, via the gift shop). After all, in one of his inscriptions, Khaemwaset is said to have been one “who so loved antiquity and the noble people who came before, along with the excellence of what they made.”