Experimental archaeology seems to breed enthusiasm. And it is always rewarding to see this enthusiasm sparked between two people who have never met, but who discover a mutual interest an object in the collection. This was the case when, last week, David Colter and Regina Degiovanni met in the Museum. 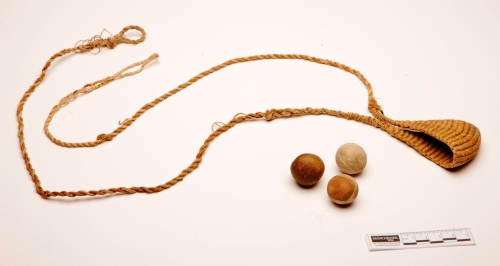 A chance conversation with David in a pub had alerted me to his interest in a sling shot (Acc. No. 103) from Kahun currently on display in our temporary exhibition, ‘Unearthed’. A separate enquiry had come from Regina, a member of Merseyside and West Lancs Weaver Guild. She was interested in how both the sling and our famous Coptic sock (Acc. No. 983) – which she’d seen at our Gripping Yarns event– were crafted. Both, it turned out, had created their own replicas of the sling shot in an attempt to work out how it was made. They were delighted when, with the help of technician Mike, we opened the sling’s display case so that they could have a closer look at the object, and measure it accurately. 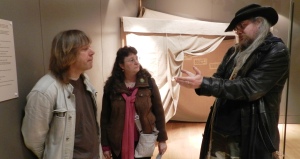 David explains to some visitors how the sling shot works.

At the pub, David had set forth a very reasonable hypothesis on the sling’s use. He believes that it was not merely a toy, as it has been interpreted in the past: it is in fact capable of delivering a lethal blow from as far away as 200 yards. He observed that it would have been suited to hunting birds, and wondered if it might have been used near a lake or marsh. Of course the sling was found by Flinders Petrie at the workmen’s town of Kahun, which is situated near the Faiyum lake: the perfect environment to go on a bird hunting expedition! 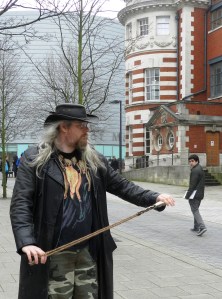 Regina’s interest in our Coptic sock resulted in her spending the best part of two days with the object, observing it closely and working out how it was stitched, knitted and/or woven. The pattern, we decided, would make an interesting gift for sale in the Museum shop.

Both David and Regina have kindly agreed for the results of this experimental archaeology to be included in our display of ‘imitation’ objects in the new Ancient Worlds galleries. Find out about another slingshot from our archaeology collection here.

The Museum continues to be actively involved in experimental archaeology. 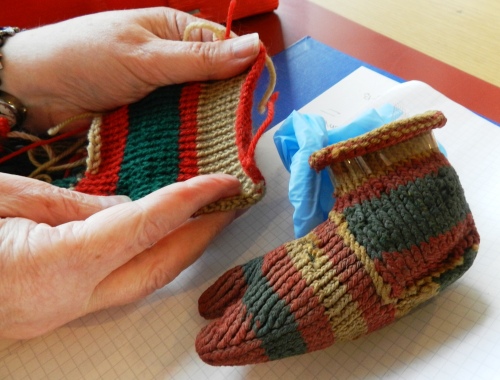