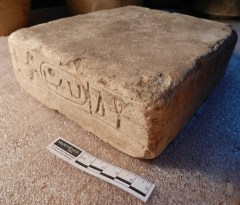 While this small limestone plinth(?) may not compare with the much better-known Abydos Kings List at Seti I’s temple, its short inscription nonetheless conveys a depth of feeling about – and understanding of – the past. Unlike more extensive king lists this modest monument records the names of three Eighteenth Dynasty pharaohs: Ahmose, Amenhotep I and Tuthmose III.

One side names ‘The good god, Neb-pehty-re, beloved of Osiris.‘ This reference to Ahmose as beloved of the god Osiris is appropriate for Abydos, the god’s main cult centre. Ahmose was responsible for a significant temple to the god at the site, fragments of relief from which are in Manchester.

‘The good god, Neb-pehty-re, beloved of Osiris… Made by the overseer of weavers(?) of the royal/southern…”

On another side is inscribed the name of Ahmose’s son, Amenhotep I: ‘The King of Upper and Lower Egypt, Djeser-ka-re, given life’ and another names ‘The good god, Men-kheper-re’ – the ‘Napoleon’ of ancient Egypt, Tuthmose III – but appears to go on to name ‘Neb-[pehty?]-re’ again, this time without a cartouche.

‘The King of Upper and Lower Egypt, Djeser-ka-re, given life’

A short dedication text makes clear that the monument is of a votive character: ‘Made by the overseer of weavers (or: servants?) of the royal/southern(?)…’

This is a rather crudely executed piece and it is unclear what sort of monument it came from, if not a self-standing plinth or support itself. Yet the text asserts personal piety by naming – and thus reifying the memory of – great kings of the past. In this regard it may be guessed that the creation of this object lies in the Ramesside period, the age of the display of overt religiosity by private individuals in particular, and a time of pronounced enquiry into the past.

The choice of kings is interesting, especially if these were the only ones named on the whole monument. These men are ‘famous’ kings: the re-unifier and expeller of the Hyksos, Ahmose; the venerated founder the workmens’ village of Deir el-Medina, Amenhotep I; and the great military leader, Tuthmose III. These are the same kings that dominate the history of the earlier Eighteenth Dynasty for Egyptologists today. It is significant that this piece comes from the sacred site of Abydos, a site with a long history of building activity, where standing monuments built by each of the named kings could have stood.

A recent visit to Manchester by Prof Rainer Hannig, who is preparing his next Handwörterbuch, of New Kingdom texts, served to highlight the many overlooked or mis-transcribed texts in museums all round the world. There are plenty of texts left which we hope will reveal their secrets soon!